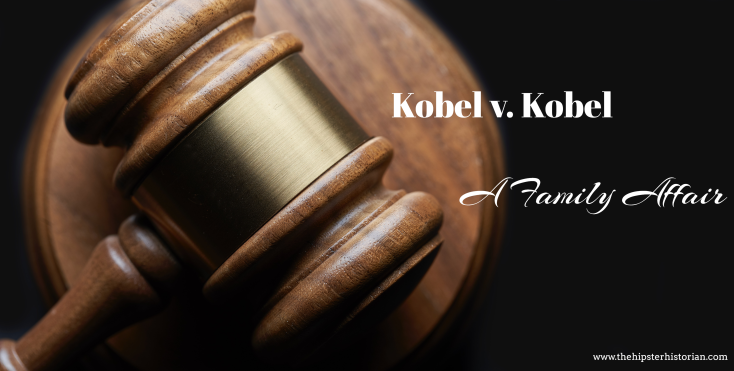 Most of my life, until I was a teenager, I hadn’t heard anything about my biological great-grandparents. In fact, I assumed another couple (William Jesse Darby & Janet Elizabeth Solomon) were my great-grandparents for years, when in fact, they were the people lucky enough to raise my paternal grandfather (them below). 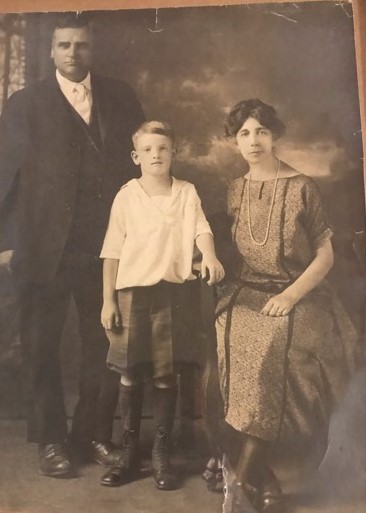 It wasn’t until my teenage years that I really understood fully what my history was. My grandfather (whom I have never met, he died in 1974), was born a Kobel, not a Darby as I had always thought. I might be a little Irish (according to AncestryDNA), but the majority of my genetics sit squarely within Northwestern Europe 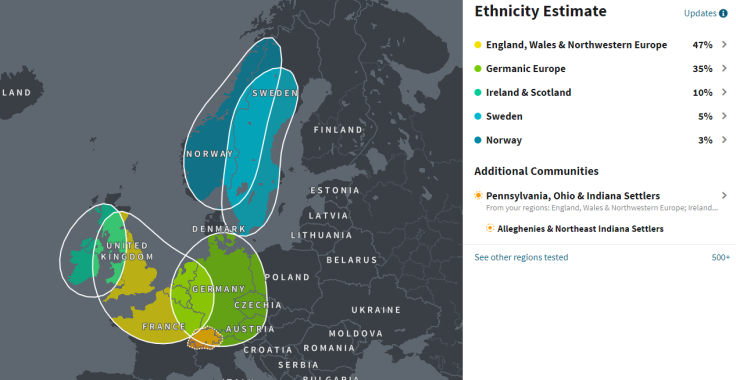 Ever since I found out the names of my biological paternal grandparents, I’ve been on a quest, a search, a journey, to find out more about the family. In the early years, my mother (Luana Darby), found out that Richard was one of at least eight children born to Myrtle May Brady and Joseph Christian Kobel.

Richard William Darby (my biological grandfather) was originally born Richard Henry Kobel on the 22nd of August 1916. While his story is a much longer one for another post, I never really knew much more other than my grandmother’s (his wife) story that his biological mother left the family and it was quite the scandal in my grandmother’s eyes.

It wasn’t until I started searching and learning more about the family that I found out more. In fact, Richard’s eldest sibling, Joesph Christian Kobel (nicknamed Joe to differentiate him from his father of the same name) was one of the key’s that opened the lock on Myrtle and Joseph Kobe’s marital woes. 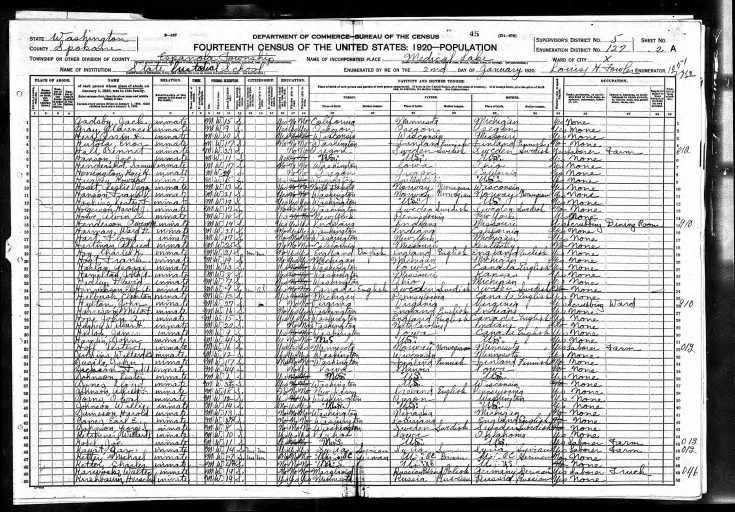 I was quite curious about finding out why Joe C. Kobel was in this state school so I reached out to twitter and with the help of my friend from Transparent Genealogy, I was able to submit a request to the Washington State Archives for information about his time in Espanola.

After contacting the state archives, I wasn’t expecting a response, much less one so quickly. Within a day, they contacted me and gave me what little information they were able to find on my great-uncle Joe. But then, came the kicker for me.

They told me there was another filed on my great-grandparents, Joseph and Myrtle, a state superior court case in fact, and asked if I would like it. I jumped at the chance because nowhere in all our years of research had we gotten this file, or known of its existence.

Within a few more days, my contact at the archives sent me the files. While it is only four pages and quite difficult to read, it provides so much more insight into the lives of my great-grandparents than I ever thought possible. 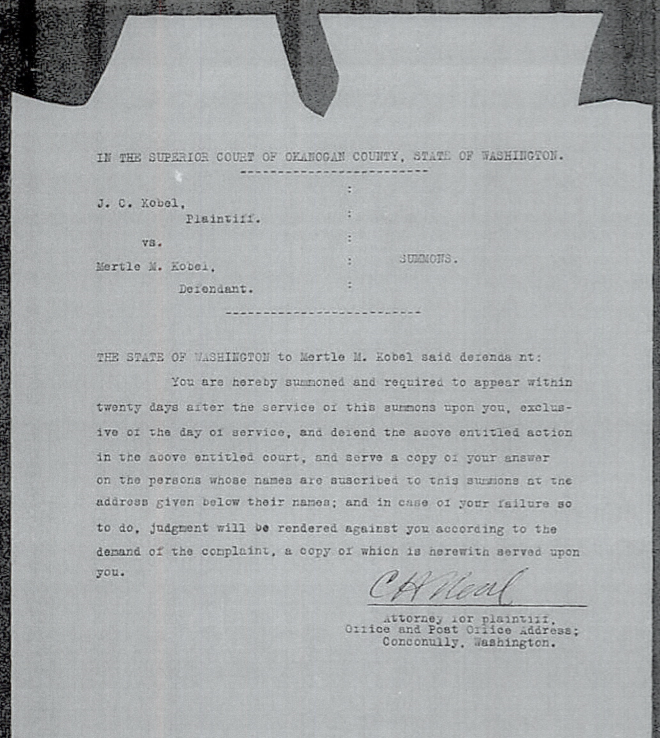 In the Superior Court of Okanogan County, State of Washington.

The State of Washington to Mertle M. Kobel said, defendant:

You are hereby summoned and required to appear within twenty days after the service of this summons upon you, exclusive of the day of service, and defend the above-entitled action in the above-entitled court, and serve a copy of your answer on the person who names are subscribed to this summons at the address given below their names; and in case of your failure so to do, judgment will be rendered against you according to the demand of the complaint, a copy of which is herewith served upon you. 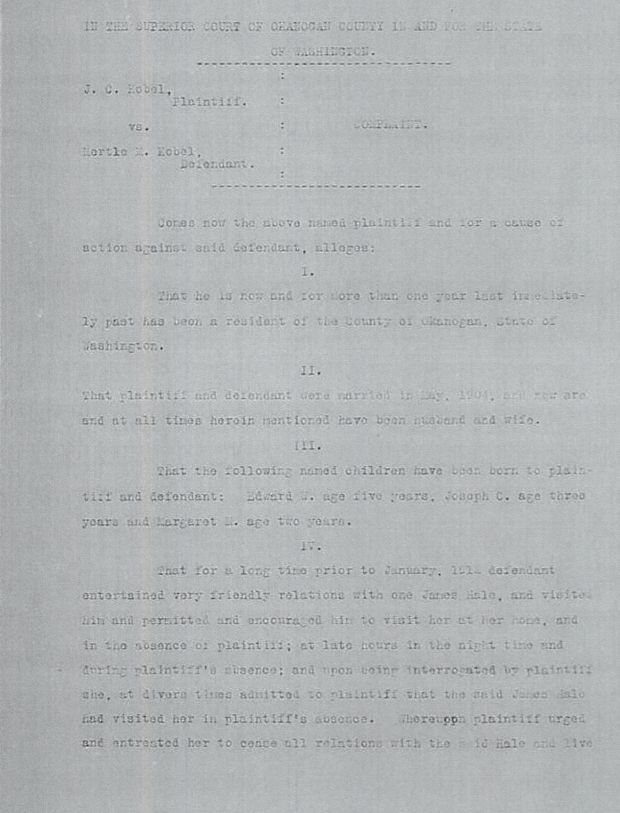 In the superior court of Okanogan county and in for the state of Washington.

Comes now the above-named plaintiff and for a cause of action against the said defendant, alleges:

I. That he is now and for more than one year last immediately past has been a resident of the county of Okanogan, State of Washington.

II. That plaintiff and defendant were married on May 1905 and are now and at all times herein mentioned have been husband and wife.

IV. That for a long time prior to January. Defendant entertained very friendly relations with one James Hale, and  visits him and permitted and encouraged him to visit her at her home, in the absence of plaintiff; at late hours in the night time and during the plaintiff’s absence; and upon being interrogated by plaintiff she, at divers times admitted to plaintiff that the said James Hale had visited her in plaintiff’s absence. Whereupon plaintiff urged and entrusted her to cease all relations with the said Hale and live… 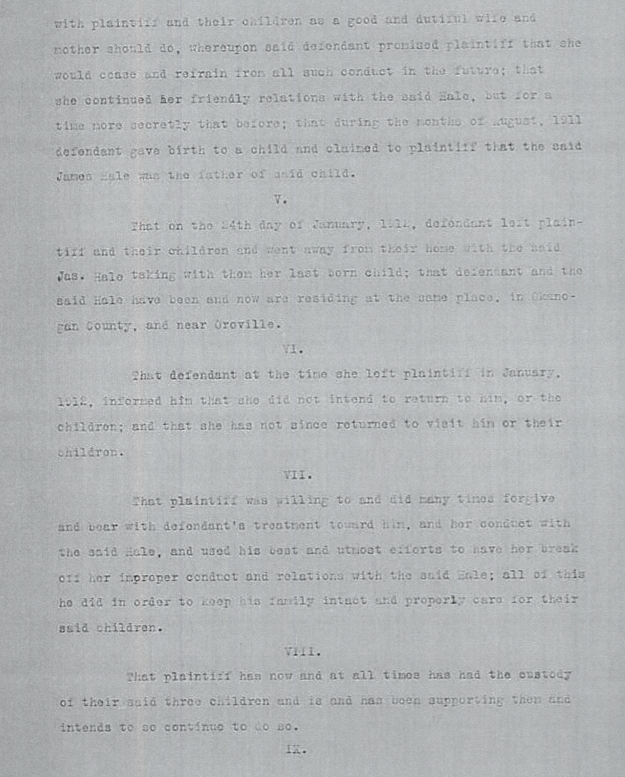 …with plaintiff and their children as a good and dutiful wife and mother should do, whereupon said defendant promised plaintiff that she would cease and refrain from all such conduct in the future’ that she continued her friendly relations with the said Hale, but for a time more secretly that before, that during the months of August 1911 defendant gave birth to a child and claimed to plaintiff that she said James Hale was the father of said child.

V. That on the 24th day of January 1912, the defendant left plaintiff and their children and went away from their home with the said Jas. Hale taking with them her last-born child’ that defendant and the said Hale have been and now are residing at the same place, in Okanogan County, and near Oroville.

VI. That defendant at the time she left plaintiff in January 1912, informed him that she did not intend to return to him, or the children; and that she has not since returned to visit him or their children.

VII. That plaintiff was willing to and did many time forgive and bear with the defendant’s treatment towards him, and her conduct with the said Hale and used his best and utmost efforts to have her break off her improper conduct and relations with the said Hale; all of this he did in order to keep his family intact and properly care for their children.

VIII. that plaintiff has now and all times has had the custody of their said three children and is and has been supporting them and intends to so continue to do so. 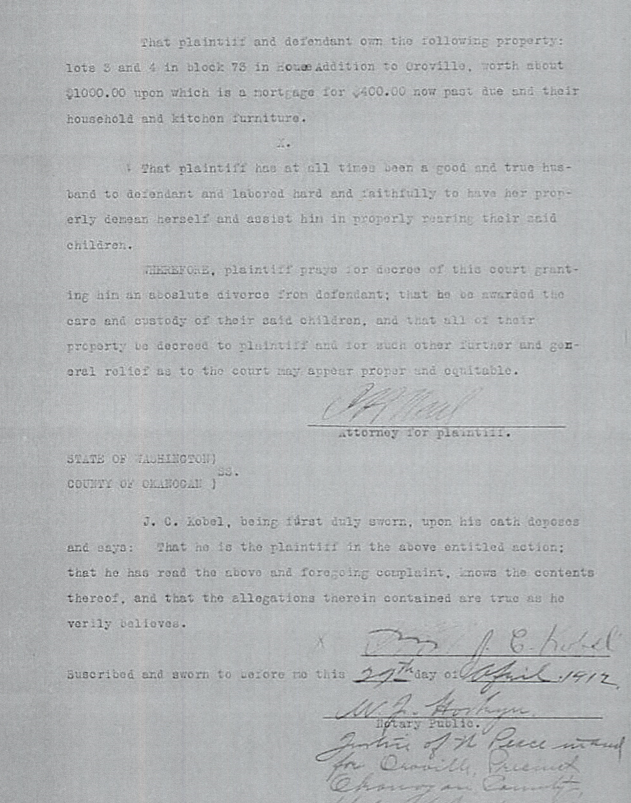 IX. That plaintiff and defendant own the following property: lots 3 and 4 in block 73 in addition to Oroville, worth about $100.00 upon which is a mortgage for #400.00 now past due and their household and kitchen furniture.

X. That plaintiff has at all times been a good and true husband to the defendant and labored hard and faithfully to have her properly demean herself and assist him in properly rearing their said children.

Wherefore, plaintiff prays for the decree of this court granting him an absolute divorce from defendant’ that he be awarded the care and custody of their said children, and that all of their property be decreed to plaintiff and for such other further and general relief as to the court may appear proper and equitable.

After reading this court proceeding, I was honestly a bit shook. Was I actually a Kobel, or had my choice in new surname after my divorce been a mistake!  I quickly called my younger brother (another genealogist — we have a family full of them!) and discussed the possible ramifications of the statements we had found.

Luckily enough, I had taken an AncestryDNA test about a year or so back (and had already looked through many of my connections, which did connect my DNA to my Kobel side — phew!). It still brought up the conundrum that we were having — how many of Myrtle’s children were actually Joseph’s? Did she lie about the paternity of the others, and did other affairs occur? While we are able to confirm many of these through DNA tests, there are just some we won’t be able to confirm or ever know the full story. 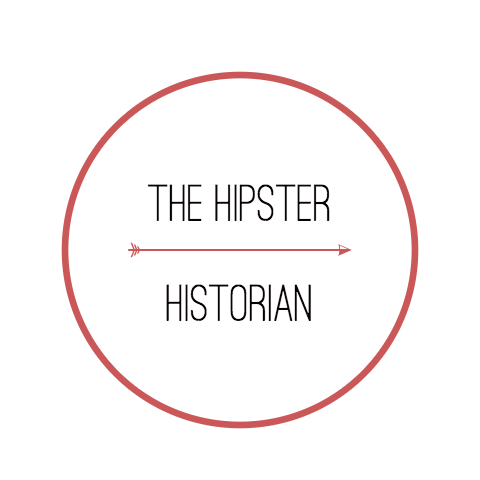 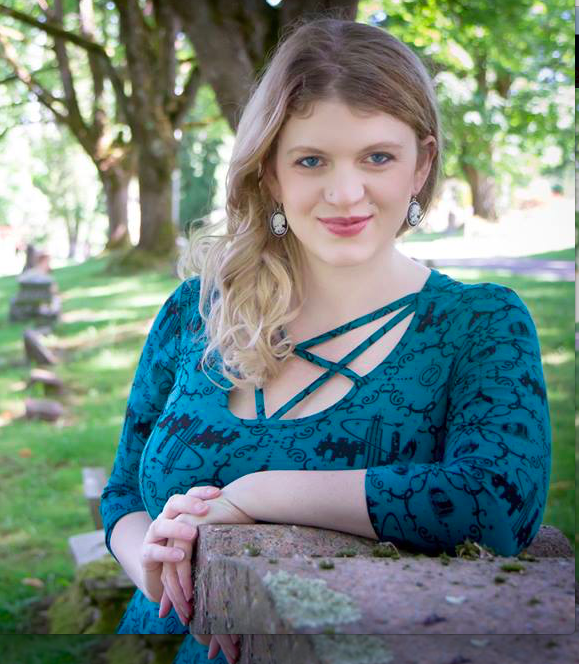