The names Kitty Mesler and do I have a story to tell you. I was born to my ma and pa around the turn of the century, in the year 1901. When I was a young gal of 15 my parents sold me to a man named Andrew Stacy in marriage for some horses and wood.

He was no good man, I tell you. I didn’t want to marry him and the man never provided for me. He abandoned me and even though he promised to take care of me, left me destitute So I sold those horses, took the money and ran away from him.

I was able to divorce him a few years later but it wasn’t easy, he tried to accuse me of all sorts of inappropriate and scandalous behaviors, but in the end, the judge listened to me and granted me a divorce on the 13th of October 1919.

But back to the tale at hand, Andrew wasn’t my bootlegger, Happy Willette was. Happy was actually born Alixis Willette in 1893 and we were married in November of 1925 proceeding his first time in prison — which was earlier that year in February at the Flathead County Jail in Kalispell, Montana.

Prohibition was a way for us to make a little money, and I knew what he was doing, in fact, I assisted at times with my pet hog. You see, we had this really neat trick to lead the coppers off our scent. The bottom of our truck bed was hollow, but I’d put that big old hog over that area and the men would be too afraid to move him — they never suspected me, but Happy wasn’t that lucky.

In addition to his arrest on the 13th of February in 1925, Happy was arrested and/or jailed at least five other times during the rest of our marriage. Not even a year after we were married, Happy was taken to the Montana State Prison in Deer Lodge, Montana on the 24th of July 1926 on charges of possession of liquor, he was only to serve six months.

I saved his arrest record from that time period which you can see: 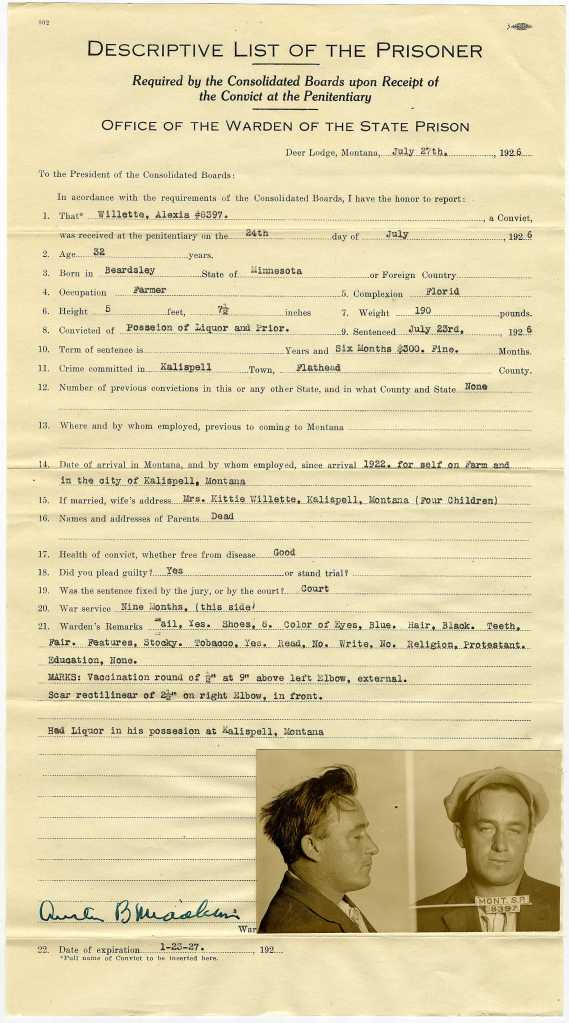 He was let out of prison in late January of 1927 and our Stanley was born six months later on the 20th of June 1927, followed by our daughter Stella in 1928. By April of 1930, Happy was back behind bars at Flathead County Jail.  Our son Lloyd was born on the 15th of December 1932 and little more than a month later Happy was issued a poor order for groceries totaling $4.31. About 10 months later, he as behind bars again at the county jail.

Five years after the mentioned stint in the county jail, our last daughter Shirley was born in Billings, Montana around 1937. Happy was able to stay out of jail for 14 years until he was arrested for the last time at age 63.

Even though Happy went to jail so many times, he was a good man, a kind man, and I loved him very much. He died on the 10th of May 1965, I will miss that bootlegging man of mine.

P.S. That pet hog I told y’all about? He got me kicked out of church once.

2 thoughts on “My Husband Was Bootlegger – Kitty Messler’s Story”